Electrifying opening to the Abu Dhabi Festival by Merchants of Bollywood

In line with the Festival celebrating the depth and diversity of contemporary Indian culture as the Country of Honour, ‘Merchants of Bollywood’ is only the first in a lineup of sublime acts commemorating and highlighting India’s vast cultural and artistic heritage.

Having entranced audiences of more than two million worldwide, Abu Dhabi audiences gathered to celebrate the cultural wealth of India as the Festival ‘Country of Honour’. Continuing its legacy of presenting world-renowned stars in the UAE, the 15th Abu Dhabi Festival welcomes artists and luminaries of the Indian subcontinent who have taken their culture to great heights through dance, music, film and theatre.

Celebrating the depth and diversity of contemporary Indian culture, the dance extraordinaire engaged audiences with an eclectic homage to the vivid energy of Bollywood, telling the story of the Merchant family, a dynasty who have shaped its course for generations through dance and choreography. The renowned stage musical featured a cast of over 40 multi-talented performers in a spectacular fusion of colour as well as sensational dance scenes choreographed by one of Bollywood’s top choreographers, Vaibhavi Merchant. The dynamic and spirited musical hits were composed by award-winning duo, Salim and Sulaiman Merchant. Seen by over two million people across the world in more than 1,000 performances across 20 countries, Merchants of Bollywood continues to evolve with tributes to the latest Bollywood blockbusters.

H.E. Huda Alkhamis-Kanoo, Founder of ADMAF and Artistic Director of Abu Dhabi Festival said: “Celebrating the diversity of international arts and culture is central to our values. The UAE has a long standing history of cross-cultural exchange with the subcontinent as well as a deep-rooted appreciation of all facets of contemporary Indian culture. The Abu Dhabi Festival 2018 Country of Honour designation recognizes the cultural wealth of India, and the close diplomatic ties enjoyed by our nations. Presenting The Merchants of Bollywood as this year’s inaugural performance demonstrates the vibrant energy that characterizes the nation’s most popular export. As the Festival progresses, the nuance and diversity of Indian culture will be presented through music, dance and film—a complement to the richly varied programme embraced by the Festival as a whole.” 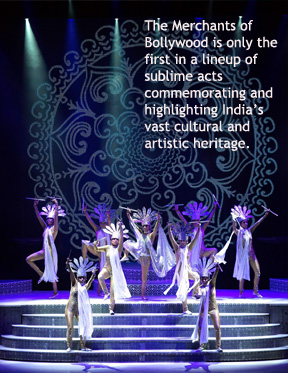 In line with the Festival celebrating the depth and diversity of contemporary Indian culture as the Country of Honour, ‘Merchants of Bollywood’ is only the first in a lineup of sublime acts commemorating and highlighting India’s vast cultural and artistic heritage. This year’s programme also includes a classical Indian dance interpretation of the work of Rumi in ‘We the Living’ by Tanusree Shankar Dance Academy and The Sarod Master USTAD Amjad Ali Khan making his Abu Dhabi Festival Debut with an evening of expressive and entrancing performances that demonstrate why he is revered as one of the greatest proponents of Indian classical music.

H.E. Navdeep Sing Suri, Indian Ambassador to the UAE, commented: “I am delighted that India’s participation at the Festival has started with the high-voltage performance of Merchants of Bollywood. The music, rhythms and energy of the show were infectious and it was great to see the audience vibe with the songs. My compliments to this wonderful festival for being the first to bring the magic of Bollywood to Abu Dhabi.”

The Abu Dhabi Festival is presented and organised by Abu Dhabi Music & Arts Foundation. ADMAF is an independent, not-for-profit organisation that seeks to nurture the arts, education, culture and creativity for the benefit of society and advancement of Abu Dhabi’s cultural vision.