By Martin D’Souza | Opening Doorz Editorial | October 01, 2017 Marriage is always looked upon with anxiety by actresses in the industry. Once married, ‘career is over’ seems to be the common […]

Marriage is always looked upon with anxiety by actresses in the industry. Once married, ‘career is over’ seems to be the common consensus. And once the kids come in, it’s bye-bye to Bollywood. But this need not be the norm, especially if you know how to maintain the work-home balance, have your priorities in check and circumvent the madness that usually accompanies the arrival of a new-born in the family.

Preeti Jhangiani is one among the many who has broken the prototype of a typical ‘stay-at-home-mum’. She has not only seen a rise in her career individually, but along with her hubby Parvin Dabbas is making notable strides with their company Swen Entertainment. This, after marriage and two sons! Jaiveer Dabbas is six-and-a-half years old, while Dev Dabbas completed two years on September 27.

Personally, Preeti is busy with appearances and stage shows and will be leaving this month for London to shoot for her next Hindi film Wajood based on child trafficking. She also recently won The Rajasthan International Film festival Award for Best Actress as well as the Rajasthan Film Festival Jury Award for Best Actress for her Rajasthani film Taawdo—The Sunlight, which is the story of an inspirational woman who changes the thought of an entire village seeped in the caste system and eradicates the abhorrent practice of untouchables. Her other film, The Masterpiece also received rave reviews recently in UK and she also recently shot for a special song for the Kannad film Kempagowda 2.

“I’m choosing strong roles which interest me. The language or medium doesn’t matter,” says the actress who has carved out a fit body after two pregnancies and a mild medical condition. “We have to push ourselves out of the rut that we women tend to bury ourselves in; one has to get out there and make the time for oneself and a career. It is never too late to restart or do even something entirely new. Work gives you a personal sense of achievement outside of the joy of being a mom and caring for your children.”

openingdoorz caught up with the busy-as-a-bee mother who has juggled her responsibility at home and career to a nicety. She welcomes us into her hectic schedule to take time out to answer a lot many questions.

Excerpts:
You seem to be good at juggling! Obviously there is more responsibility now as opposed to when you were single…
[Smiles] I don’t know if motherhood has changed me as a person or if my personality has changed or not but my priorities definitely have! I’m not the first person I will think about when I wake up in the morning, nor is it my husband—it is my children! What will they eat? How should I entertain them today? What needs to be done for school? I can’t even buy anything for myself anymore without thinking if I should buy something for them first! If have to go out for work, planning their schedule is the first thing I do before planning my trip! So priorities change but not necessarily the person you are. If anything, you try to be a better person and do everything correctly whether it’s personal, social or civic because you know your kids are watching and children only learn by example.

Mothers are faced with a constant battle between being a ‘stay-at-home-mum’ and a working mum…
Yes, that is a big question. One can only know the guilt of a working mother if one has a child! So anyone else commenting on working mothers should shut up. It is the hardest thing in the world to leave your child in the hands of a nanny or caretaker. And frankly, I do feel that they really need the attention of parents between the ages of 2 to 6.

Any advice for young mothers, who have given up on being working mums but regret it at times because they miss being the working woman!
Frankly, I can never see myself being only a ‘stay-at-home mom’. But that choice is very, very personal. I feel I look after and connect with my kids better if I go out and do my own thing and I believe that a small distance is better for the child’s independence too. I am a strong advocate for raising independent children who are not dependent on anyone emotionally or for their daily needs to go on and be successful and happy individuals

Parvin and you come across as an inspirational couple with a very healthy marriage. How do you both cope with the ups and downs that usually accompany a marriage?
I don’t know if we re inspirational to others but both of us try to strike a balance between home and work. I think what works is that both of us realize that every marriage is give and take and you have to help each other and support each other no matter what. We do feel we have a larger responsibility as we are raising boys and we need to raise them with the right values and teach them the importance of respecting all human beings as well as their environment and to be grateful for whatever they have.

How is Parvin as a father?
Parvin is a great dad and the best part about him is his laughter and sense of humour! The kids love him because he is a kid with them. He is like one more six-year-old with my boys and that’s really what they need from a father! He wants to raise good human beings first and not ones that are only good in studies or sport and that is the most important thing for both of us.

Being a new mother is sometimes like swimming against the tide with mums taking advice from older women in the house, parenting blogs, the Internet… Who does Preeti go to when she has a question on parenting?
I go by my instinct. These are crazy times we live in; if you go online you’ll go crazy and god forbid you ask a parenting question on a mother’s school group! So I say trust your instinct and do what feels right! Having said that, my ‘go-to-for-everything’ is my own mother. She is the main reason I’m surviving, able to work and do everything I want to along with raising my kids.

One of the obvious downsides of motherhood is getting used to the changes in your body. How have you managed that?
Yes, the body does change after pregnancy. After two pregnancies, the changes are even more [Laughs]. Not everybody has the resources or will power or even time to get your old body back, but rest assured, if you’re determined it is possible! I’m not going to be one of those who says ‘accept the changes in your body and live with it’. I would advise everyone to exercise and keep fit and eat healthy before, during and after pregnancies to make getting your old body back easily. I say this from experience because I didn’t work out at all during my pregnancies and then my strength all but vanished! I had to build my strength back from scratch! 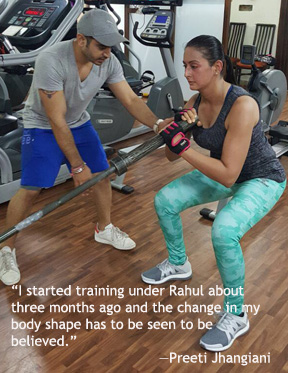 You are now training under Rahul Pradassaney, how much of a difference has his regimen made to your fitness levels?
I heard about Rahul from another momma friend of mine. I started training under him about three months ago and the change in my body shape has to be seen to be believed! Plus, it takes great effort to drag yourself out to a gym but if you know you’re not going to be doing the same boring routine everyday it’s much easier. His exercises are all thought out and planned and suited to each person’s needs and body type. It’s a mix of functional and weight training along with all kinds of core exercises. He also has a cardio dance class which I attend. It’s high impact cardio! Plus his occasional boot camps are a shocker for the body which you sometimes need to do to get those first few or last few kilos out!

Moreover, I have to tell you this. It was doubly hard for me as I developed Deep Vein Thrombosis during both my pregnancies. So I had to wait for that to clear up and take lots of blood thinners before I could start working out. But I was determined to get back into shape.

Finally, you have maintained your maiden surname…
There wasn’t much thought behind that. It’s just unnecessary and involves mountains of paper work and both Parvin and I don’t care.